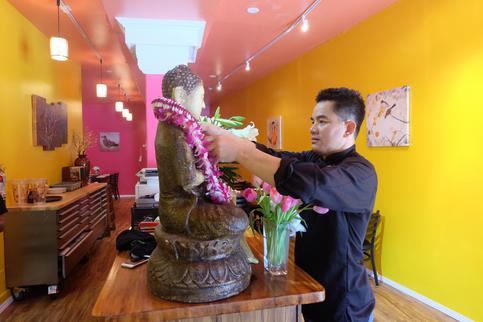 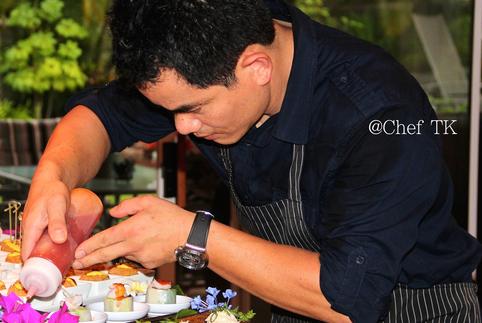 Known to everyone as T.K., Thepthikone Keosavang came to United States  in 1987. At 16, he started working in the business at the Peppermill Restaurant in the Strip as kitchen prep. A quick promotion to line cook sparked the interest for him and thirteen years later, he is the executive sous chef at Las Vegas’ Best Japanese Restaurant in 2005 and 2006.

It hasn’t been an easy journey for someone who didn’t have English as first language but it didn’t stop T.K. from applying for a job at MGM Grand when it opened in 1993. After standing for almost five hours he landed a cook helper position at the original Studio Café where he was alsoimmediately promoted to line cook. When Emeril came to MGM in 1996, T.K. jumped on that opportunity to work under a big name and worked under Chef Michael Jordan who now owns the famous Rosemary off the Strip. he came back to Studio Café when they gave him a chance to be a junior sous chef. When Chef Terry Fong opened Gatsby’s after Charlie Trotter closed, T.K. took this chance to learn more and demoted himself to a master cook and transferred. MGM Grand was in the frontline of innovation in Las Vegas when they opened the Mansion and T.K. made sure he’s a part of this and got a job as Master Cook under Chef Philippe Rispoli, now at the helm at Daniel Brasserie. While he’s there, Michael Mina took over the Gatsby’s space and opened Nobhill. T.K. was there as the opening sous chef and helped Chef Mina win best new restaurant in Las Vegas that year. Wanting to continue learning and challenge himself, he wanted to try a different segment and transferred as sous chef in the buffet. He also worked at the Skyloft, MGM’s new wing for the VIP before he was tapped by MGM Grand’s executive chef, Steve Peterson to be the executive sous chef at Shibuya. He recently led the team that represented MGM Grand in the MGM Mirage Culinary Challenge against Bellagio and emerge as the 2006 Champions. MGM Grand has been the professional home for T.K. in the last thirteen years and given the chance to work in such a diverse group of chefs and restaurants, T.K. developed a very open minded style of cooking. Picking up speed from the buffet, finesse from Michael Mina, French techniques at the Mansion and back to his Asian roots at Shibuya, he’s very well rounded and quality driven. T.K. enjoys cooking nouvelle Asian fusion the most. Not having a formal training in cooking gives him more freedom and less limitation to be creative and experimental with his style. After winning two years in a row as the best Japanese restaurant in Las Vegas with Shibuya. Spending the last 4.5 yrs at Brown’s Beach House Restaurant at The Fairmont Orchid Hawaii as the Chef De Cuisine and recently name the only second 4 Diamond Restaurant in the Big Island.

Innovative chef with exceptional records of service and international experience. More than 13 Years of expertise in all facets of cooking and management for MGM Grand Hotel. Excellent leader and mentor with the ability to build team cohesion and inspire individuals to strive towards higher levels of achievement. Proficient in planning, organizing and implementing procedures with rounded experience in kitchen operation with union environment.

Winning two years in a row as the best Japanese restaurant in Las Vegas with Shibuya. Assist Nobhill for Best New Restaurant Opening the first year. Represented MGM Grand in the MGM Mirage Culinary Kitchen Challenge against Bellagio and emerge as the 2006 Champions.

The winners of culinary cup challenge in 2006 between Bellagio and MGM Grand Hotel. Employee of the month. Manager of the quarter for Food and Beverage for MGM Hotel. Manager of the Month at Fairmont Orchid, 2008 and 2009, 2011 awarded 4 diamond for Brown’s Beach House.

Directly responsible for daily service management which include, but are not limited to training and developing a strong cohesive team to expedite the restaurant’s vision. Assist the chef in all office and kitchen works including scheduling, ordering, food and labor cost control, inventory, menu items, daily specials and all other necessary steps to insure quality products. Implementing and maintenance of procedures, Expediting, sauce making, line set-up & break down, Ensuring 100% satisfaction of both external and internal guests. Participate in all on and off site events and activities that catered between 50 to 5000 people in buffet and up 1200-3200 in “A la carte restaurant set up”

Develop necessary skills in all line stations including prep and sauce making. Improved ability to work alone when necessary and be team member when needed. Assist in onsite events and activities. Help on daily specials and special/party menus. Follow recipes and help maintain consistency trough out the kitchen. Train cooks and cook help/preps. Assist in making sure customers are 100% satisfied and help in all last minute requests.